Here is a little bedroom redecoration teaser…..I am waiting for the room to be repainted before I can really get my hands on the room but take a look at what I have already purchased for the redo…..

Just before Christmas we decided to move our two boys into a room together. We weren’t sure how it would all go, but we could not be happier.

The room was previously decorated in a dinosaur theme……

And this worked for both of them while I could buy matching dinosaur linen for our youngest’s cot. However, once Master C moved to a big bed, I could no longer source a comforter to match his brother’s.  Apparently that is a big deal to a 2 year old.

So I was forced to visit my favourite Children’s linen store, Adair’s Kids 😉 . Here we chose a travel/plane themed ‘Toby’ comforter and the matching cushions. 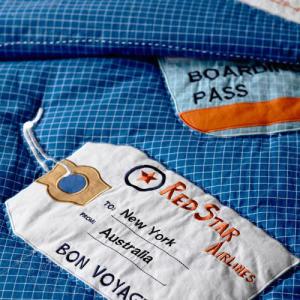 Isn’t the suitcase cushion the cutest!? That is what really sold me on the whole set.

I didn’t love the matching artwork that they sold in Adairs, so it took some hunting to come up with something to go on the walls.  Finally I found two very amazing Etsy stores with the most amazing prints.

Firstly, I picked up this set from the lovely Trish at Strawberry Jam Studio.

And here it is framed waiting to be hung in a freshly painted room. (Sorry for the poor picture, the weather here is still miserable!)

I cannot rave enough about how amazing Trish’s customer service was. Thank you, Trish!

The colours perfectly suit the linen. The boys love the dog and giraffe flying the planes and I love the typography and quote.

The other piece I picked out for the room was this brightly coloured world map from Wallfry. 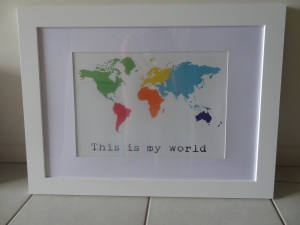 Again, the colours are perfect and the Geography teacher in me loves a map.

So there is the start of the makeover. I am itching to sort out some better storage solutions in this room now that Master O has started school. Stay tuned!

I was lucky enough to have some kid-free time today to have a browse of the shops.  One store I love to have a look in when I am unhindered by children is Typo. It has great stationery and homewares and is very well priced.

After picking up some great pens on sale to do my Project Life journaling, I was drawn to their range of freestanding letters and letter canvases.  It is ridiculous how much I love typography.

I couldn’t leave without picking up these cute little canvases to pop into the master bedroom, which is getting a little bit of a revamp at the moment. 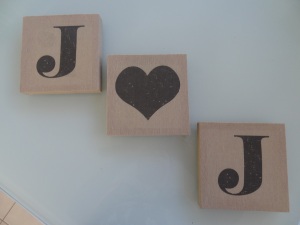 The letters and symbols are printed on burlap and strung on a canvas frame.

I picked these three up for $10.  I probably couldn’t make them for this price.  However, what a fun project it would be to make your own if you had leftover materials and supplies on hand.  Print or stencil your letters or symbols on your fabric and staple it to canvases or frames.

Until I find the perfect home for these, they will sit on the low boy in the bedroom.  Cute.

It occurred to me the other day, as I was giving Master O’s room a quick tidy, that I hadn’t shown you all the changes we made in his room.

Towards the end of last year, as Master O’s 4th birthday loomed, we struggled to find him a present.  We really didn’t want to buy him toys as we knew he would receive more than enough as gifts from the family.  I really had no inspiration until I found myself staring absent-mindedly into a store window while waiting for my sister.  As she arrived and I turned to leave, I realised what I had been staring at…..the cutest range of dinosaur linen and accessories on a fantastic sale.  There and then I decided his present would have to be a dinosaur room makeover.

The day before his birthday party, while he was a daycare, I set about transforming his room.  Previously it had sported a nautical/pirate theme which I shared in these posts here and here, but this is what it looked like on the morning I started the transformation.

After a good clean up and rearrange, followed by the addition of  the new duvet cover, matching cushions and bunting, the room looked a lot fresher.

I added a few other nick nacks that suited the theme, like these cute bookends. 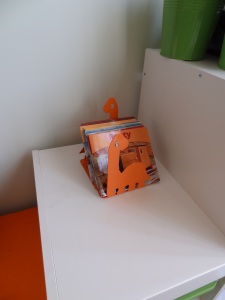 I had already added a padded cushion to the Trofast toy storage units to make a reading seat, but now I could see how well my colour choice matched with the linen. You can read about how I made the seat  here.  A little rearranging of the Trofast tubs I already owned enabled me to bring the colour green into this area of the room as well.

I had tried to purchase some artwork for the walls in time for his birthday but I couldn’t find anything that matched the colour scheme. Master O didn’t mind, he was chuffed with the transformation.  The walls remained blank until about 3 months ago when I returned to the linen store and found a matching dinosaur canvas in stock. 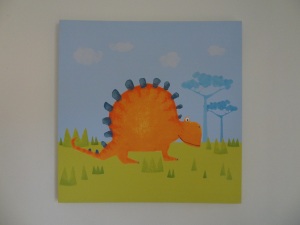 So with one wall decorated,  I thought I might have to make something for the other wall – but what?  On holidays last month I came across a stall that sold all manner of dinosaur cutouts,  2D and 3D.  The were amazing and so well priced that I had to be restrained.  I purchased 2 x 2D cutouts and after a bit of spray paint, attached them each to a canvas.  It was a such a simple art solution and they really do pop with their shiny bright orange paint.

The other purchase I made was 3D pterodactyl.  After a couple of coats, also in the bright orange paint, I attached him to the ceiling.  I was concerned that he might be a bit scary for a 4-year-old, woken in the middle of the night, but Master O has entrusted the pterodactyl with the task of keeping him safe.

So after stalling for nearly 4 months with the artwork, the room is pretty much complete now.  Master O received a couple a big dinosaur figurines for his birthday and Christmas that fit in perfectly with the colour scheme so they now reside on top of his Trofast unit and look very much at home.  We also picked up a hat stand shaped like a tree on sale at Target.  It is the perfect place to hang his Kindergarten and library bags when it is not some how involved in some imaginative dinosaur play.

This really has evolved into the perfect room for our dinosaur loving boy.  What are you favourite themes for little boy’s rooms?